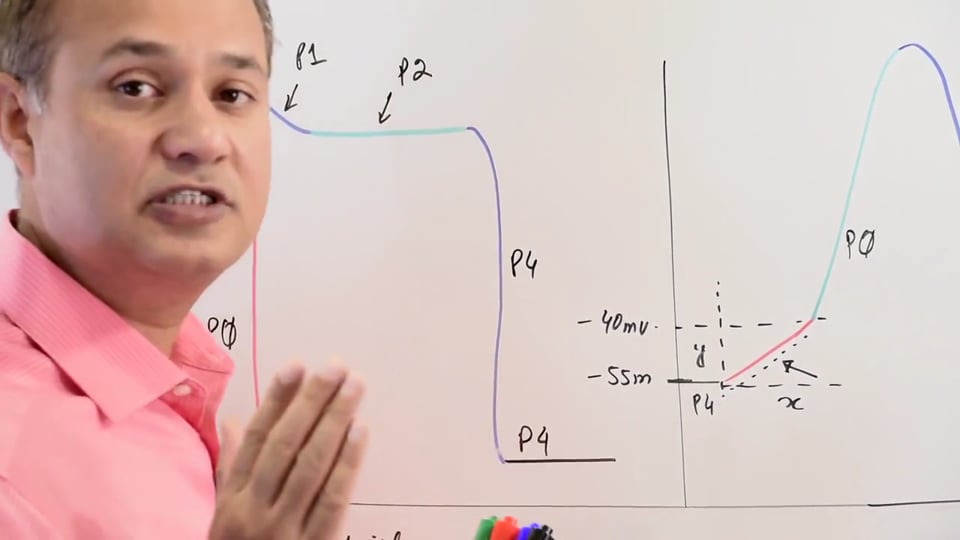 The nodal tissues and the Purkinje fibers exhibit automaticity in their properties as they are able to undergo spontaneous depolarizations. In other words, these tissues do not require the need of an external stimulus or a trigger to undergo depolarization. This is in contrast to ventricular fibers that do not show automaticity. The reason behind this phenomenon can be explained as follow:

• The resting membrane potential (RMP) of nodal tissues is less negative than the RMP of ventricular fibers. This allows the nodal tissue channels to operate in a semi-activated state even during the resting phase of the action potential. The comparatively more negative ventricular fibers do not show this property and hence, are not easily activated by low voltage impulses.

PHASES DURING AN ACTION POTENTIAL

There is a gradual increase in the RMP of nodal tissues from -55mV to -40mV. This is known as the slope of depolarization, after which occurs the Phase 0 of action potential. This slope is important as multiple factors, such as the ANS and certain drugs, act to alter this phase and bring about changes in the rate and rhythm of cardiac activity. An increase in the slope of depolarization will cause the SA Nodeto generate action potentials at a higher rate. Flattening of the slope will result in fewer numbers of action potentials in a given time which greatly decreases the rate at which the heart beats.

An isolated SA node has the highest intrinsic rhythm of impulse generation, i.e. 100 beats/min. This intrinsic rhythm of SA Node is regulated down to 72 beats/min under the influence of the autonomic nervous system. Similarly, the AV node has the ability to depolarize at a rate of 55 beats/min. SANode, having a considerably higher frequency of depolarization, overrides the pace maker activity of the AVNode. This causes the AV node to generate action potentials at a rate similar to SA node. Upon cessation of high frequency impulses from SA node, as happens during bundle blocks, the AV node is shown to beat at its own inherent frequency. Impulse generation of purkinje fibers is at a rate of 15-30 beats/min. There is a respective decrease in the frequency of depolarization as we move along the bundle of His and the Purkinje fibers. This relative difference in the intrinsic rhythm of different parts of the cardiac conduction system allows a uni-directional flow of impulses across the entire conducting system.

As described above, the SA node has the highest rate of depolarization and therefore, it dictates the rate of cardiac activity. Altering with the mechanics of SA node will cause alterations in the rate of heart beat as a whole. Similarly, the velocity of conduction is controlled by the AV node(dimensions are 1*3*5 mm) and AV bundles as the speed of impulse travelling through them is the slowest. Time duration for conduction through these is 0.12 seconds. Velocity of impulse at AV node and AV bundle is 2 meters per second and 4 meters per second in purkinje fibers. Dromotropes act on these areas of the conducting system and cause changes in the velocity of impulse conduction.

DIFFERENT ION CHANNELS AND THEIR AFFECT ON THE ACTION POTENTIAL

• The Phase 0 of ventricular action potential is brought about by fast voltage gated sodium channels. This phase is referred to as the upstroke of action potential and corresponds to the QRS complex of the ECG.

• At the end of depolarization, there is a brief fall in the voltage of action potential as a result of opening of transient chloride and potassium channels. This isPhase 1 of the depolarization. Fast sodium channels transition to their inactivated state.

• The action potential is brought back to the resting membrane potential (RMP) or Phase 4. The sodium-potassium ATP-ase is responsible for the maintenance of RMP until the arrival of the next action potential. Fast Na+, L-type Ca2+, and rectifying K+ channels (IKR) close, but IK1 channels remain open.

It’s important to understand that the nodal tissue (SA and AV) lacks fast Na+ channels. Thus, the upstroke of the action potential is mediated by inward calcium current rather than the sodium current. In addition, note that phases 1 and 2 are absent in the nodal tissue.

• The RMP (Phase 4) in nodal tissue is kept at -55mV by the Na-K ATPase pump. The less negative RMP of nodal tissue, compared to -70mV of ventricular tissues, allows it to exhibit automaticity. At -55mV, the fast sodium channels (also known as 'funny' channels) are in a semi-open state which causes leakage of positive ions into the nodal cells. Leakage of ions causes an increase in the membrane potential in a positive direction. The membrane potential gradually increases to -40mV. Upon reaching this threshold potential, the sodium channels close and remain closed for the rest of the action potential as they enter a state of refractoriness.

• At this point the slow-gated T-type calcium channels open which creates the spike of depolarization (Phase 0). These differ from the L-type calcium channels (in the ventricular tissue) in that they open at a more negative membrane potential (-70 mV).The calcium ions that enter the cells during this phase are also involved in excitation-contraction coupling of the myosin light chains with actin filaments.

• Repolarization (Phase 3) in nodal tissue is similar to that of ventricular muscle fibers. Inward Potassium current enters via the IK1 & IKR (rectifying K currents) channels. The fall in membrane potential will result in activation of the sodium-potassium ATPase and the cycle is repeated.

In this video we will learn about:

3. Control of the heart rate and conduction velocity.

5. Automaticity or self excitation. 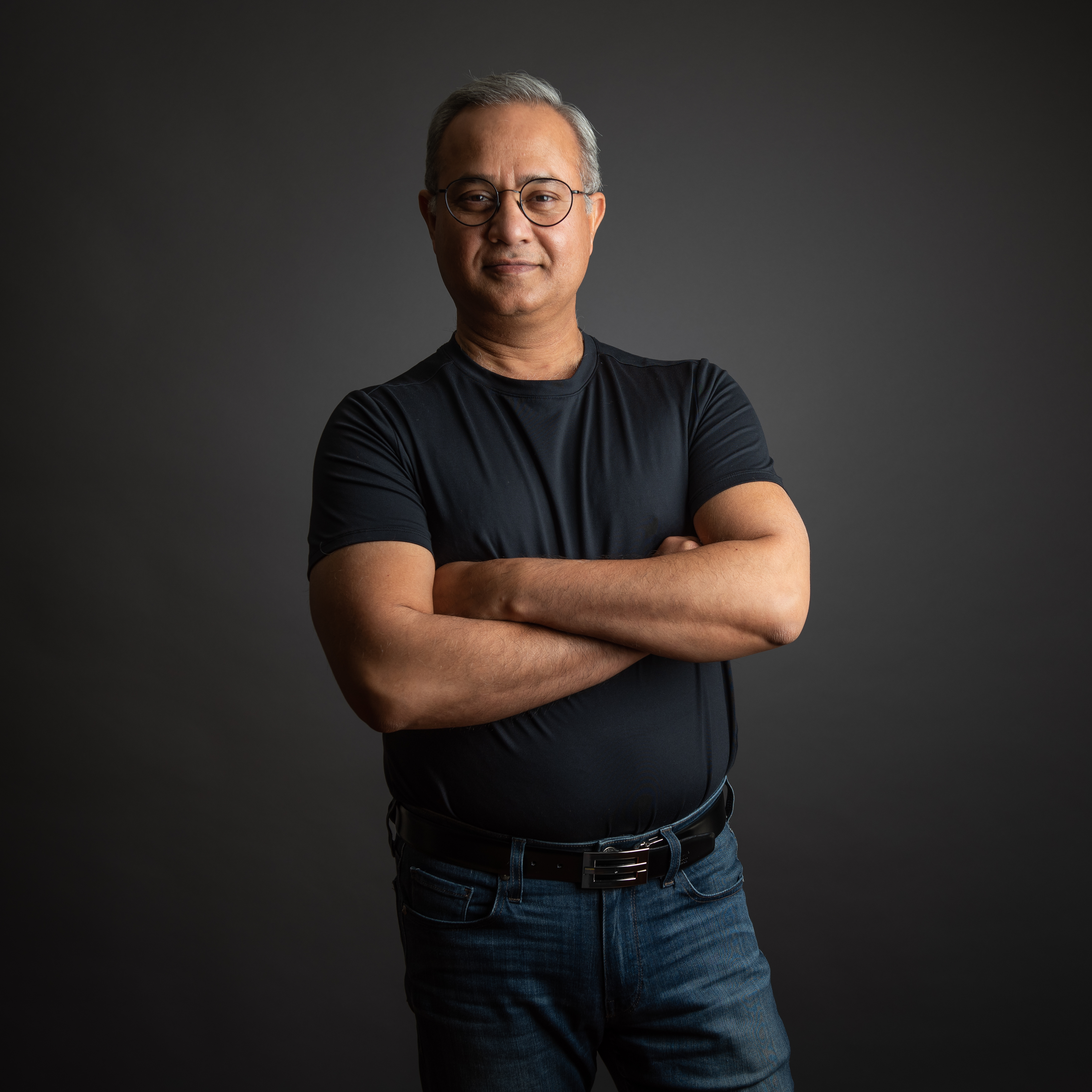 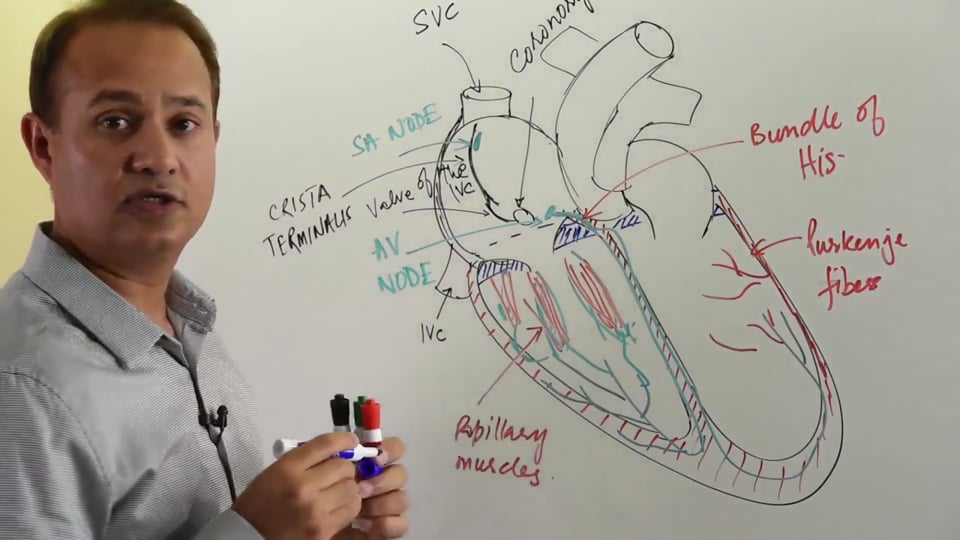 Development of the Conduction System of the Heart 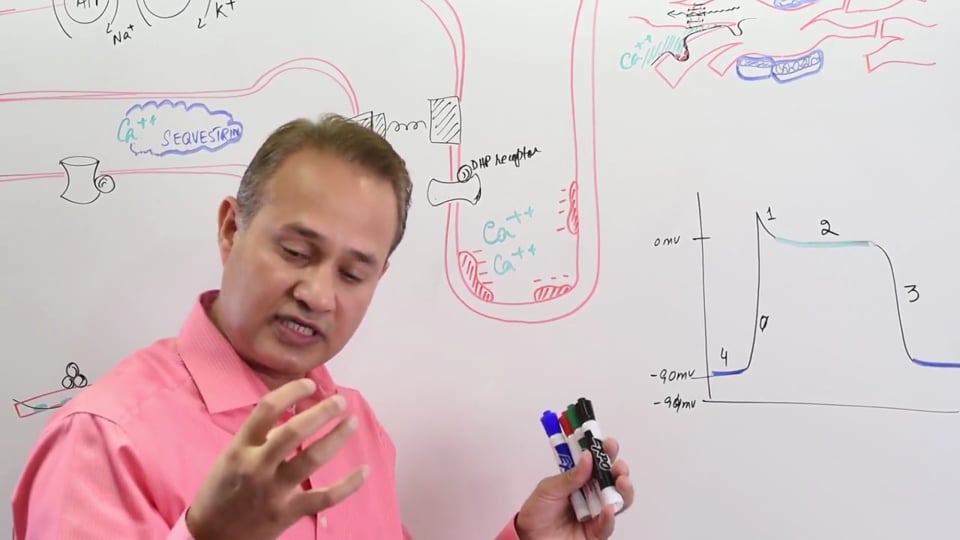 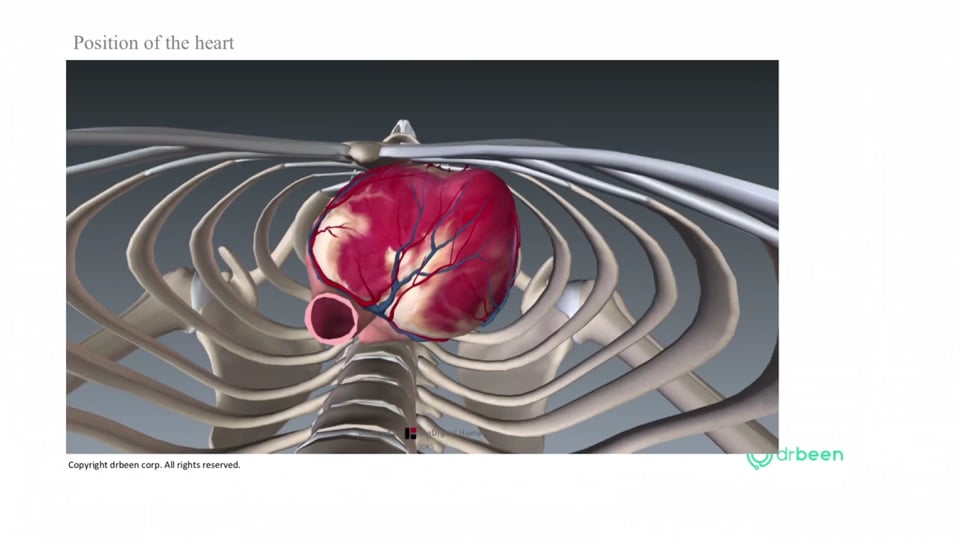 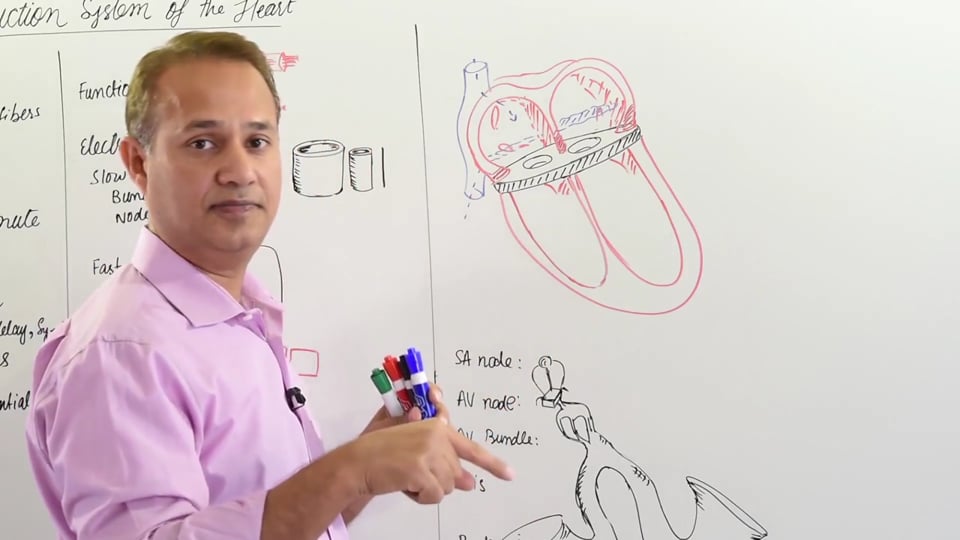 An Overview on Electrophysiology 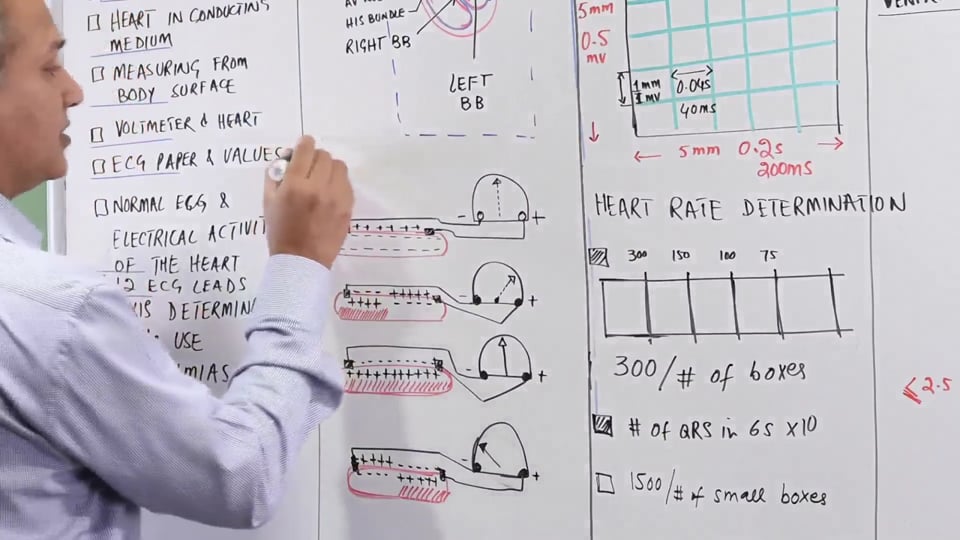 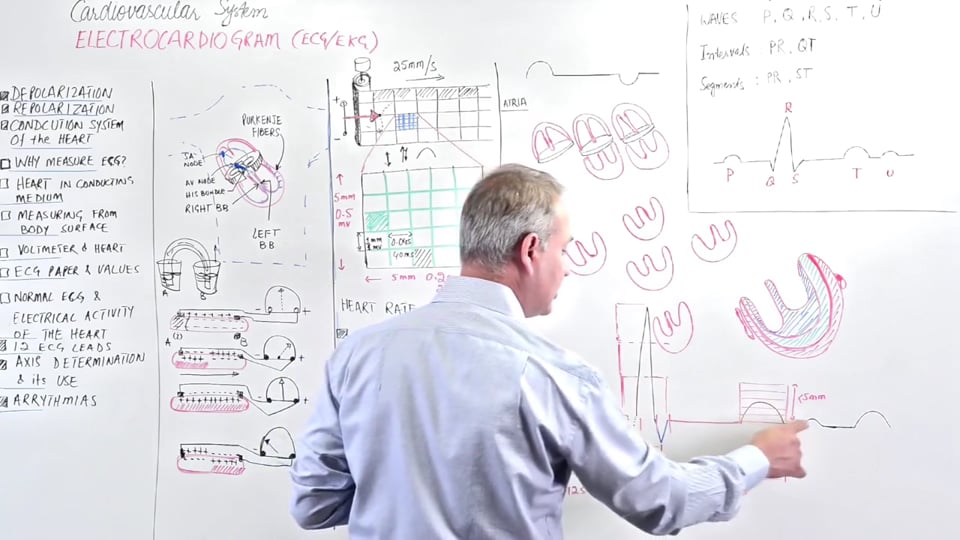 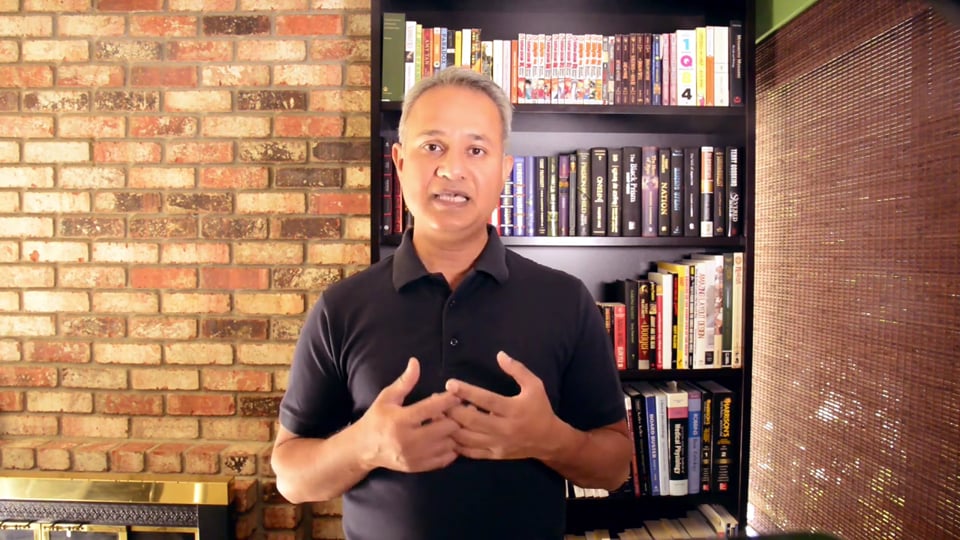 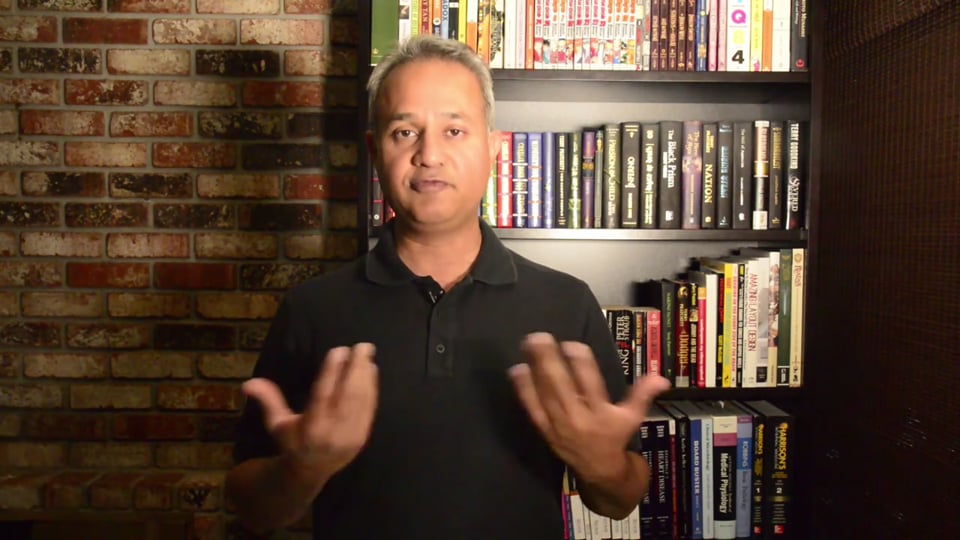 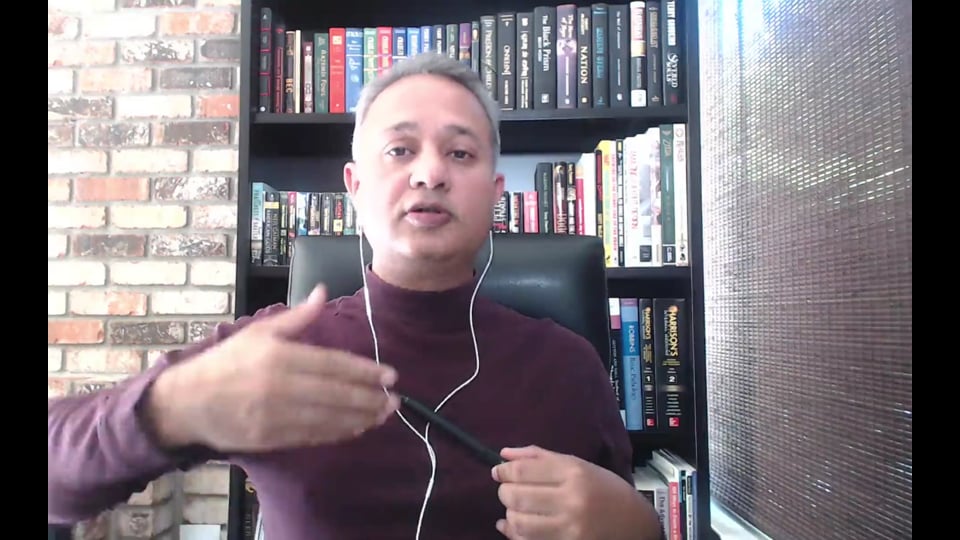 Hypertrophy and Enlargement of the Heart 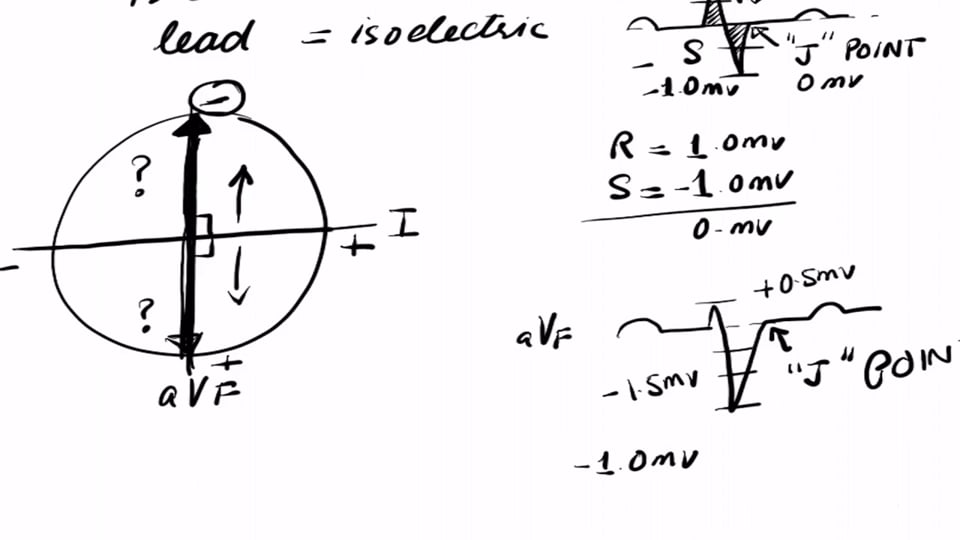 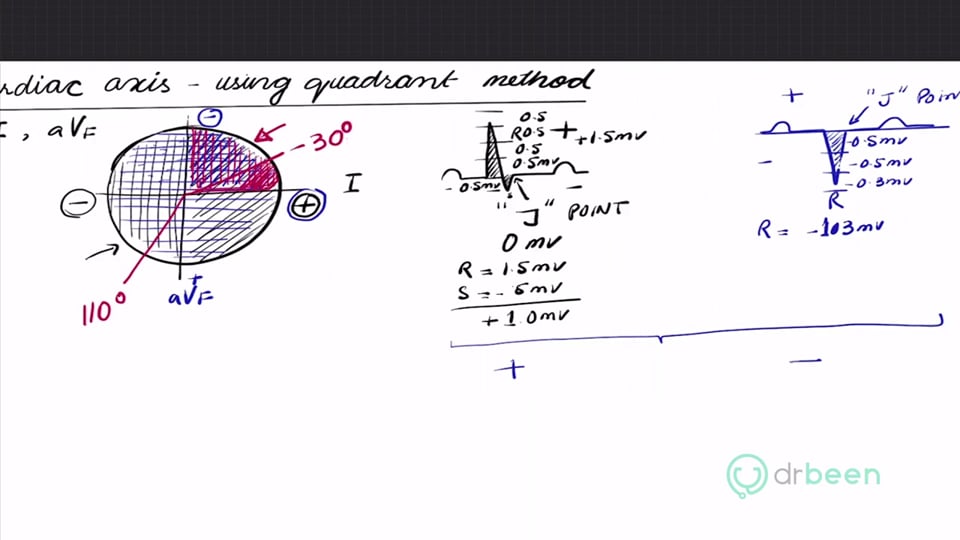 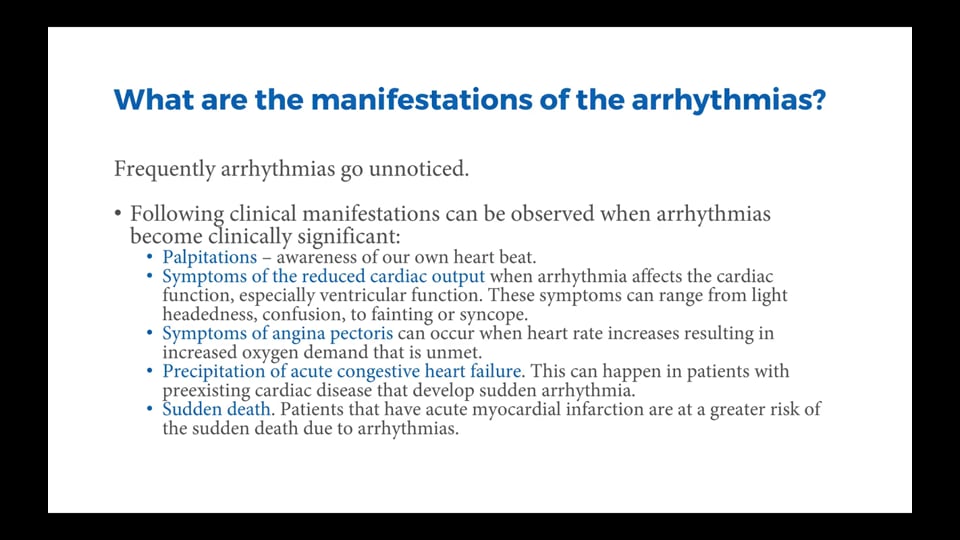 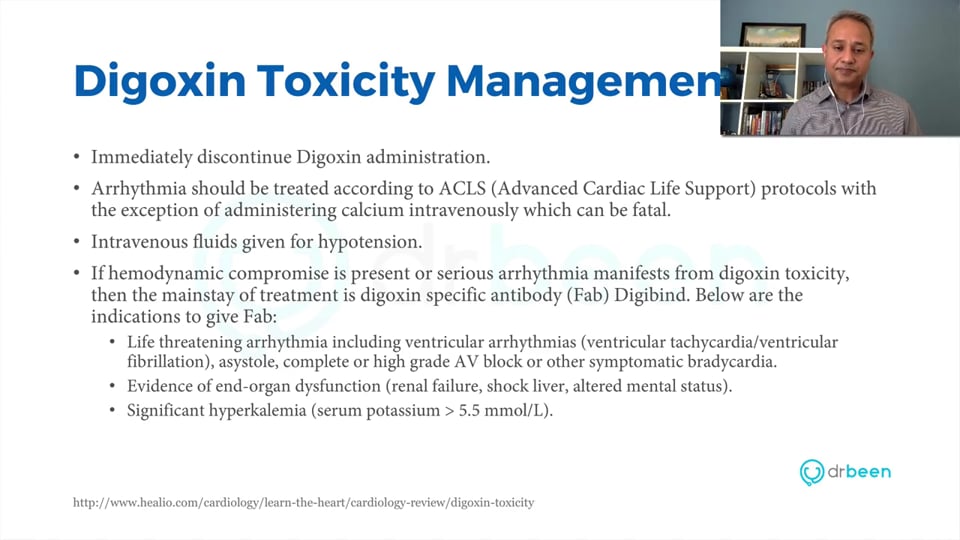 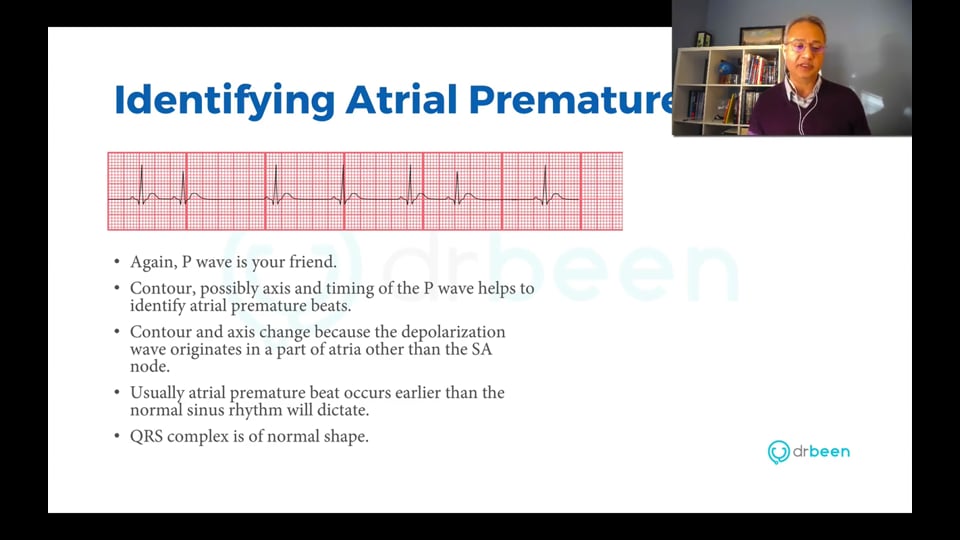 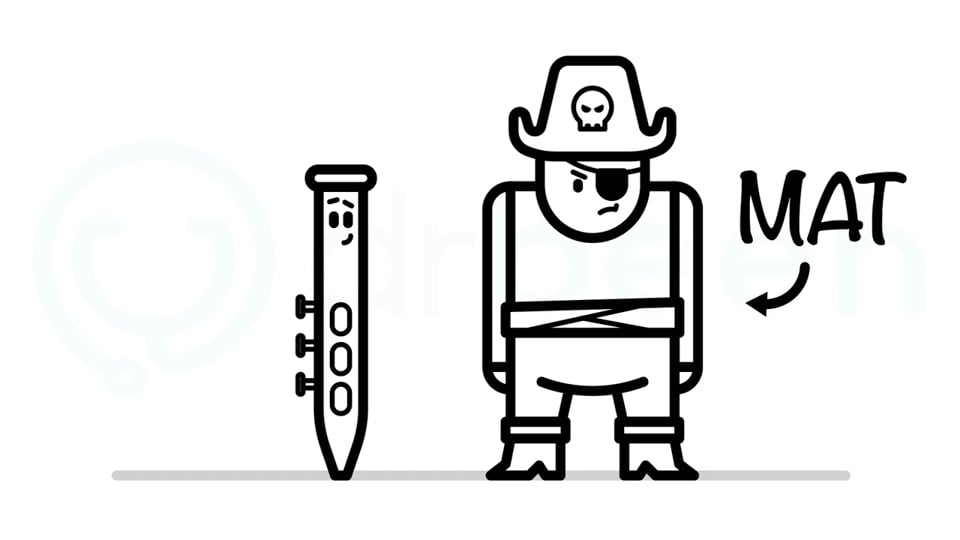 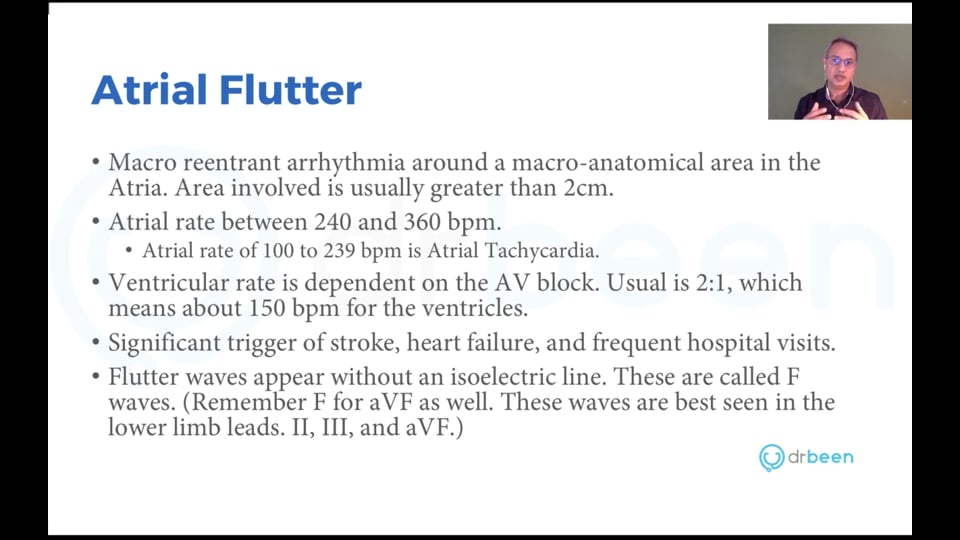 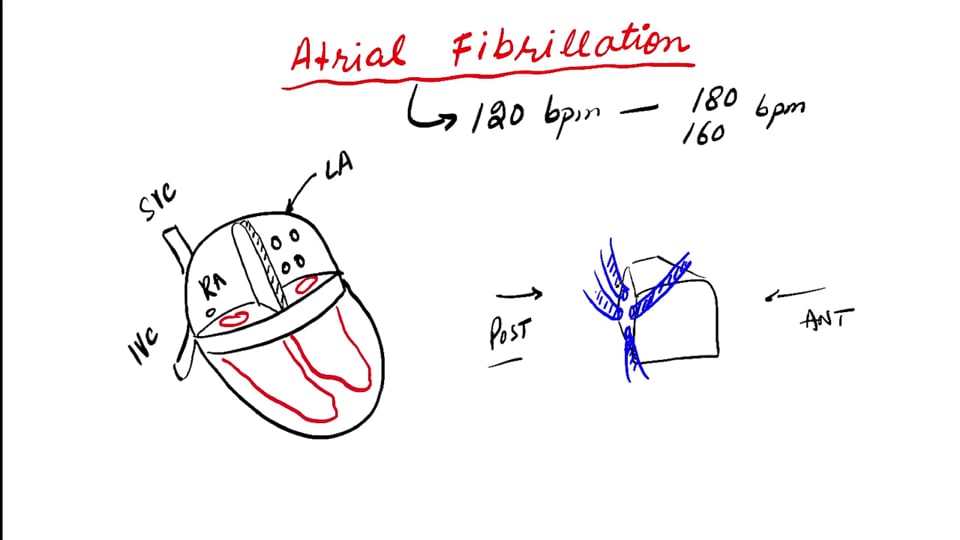 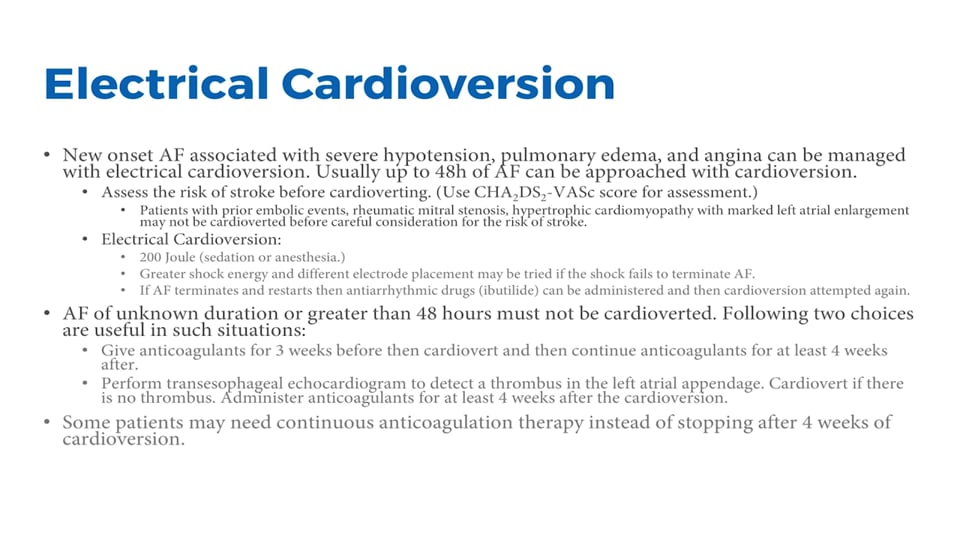 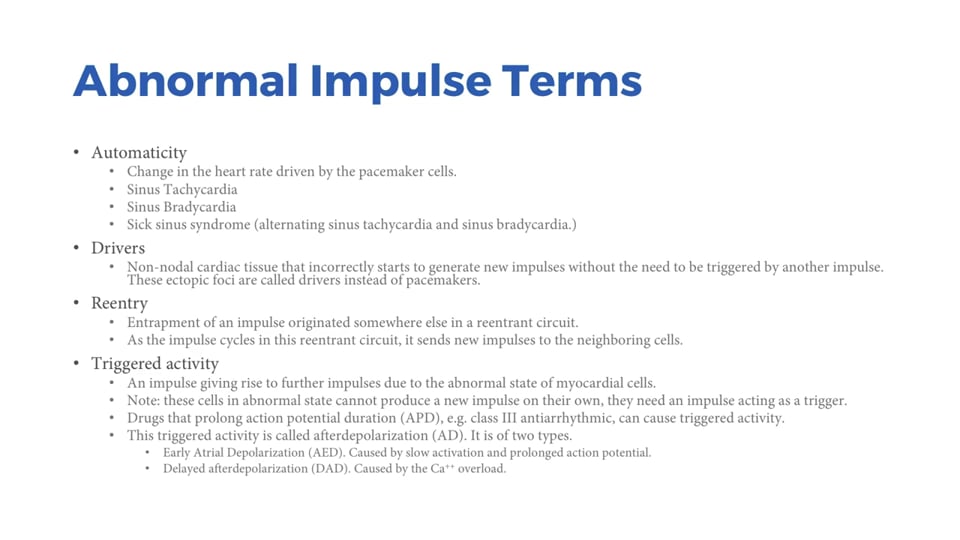 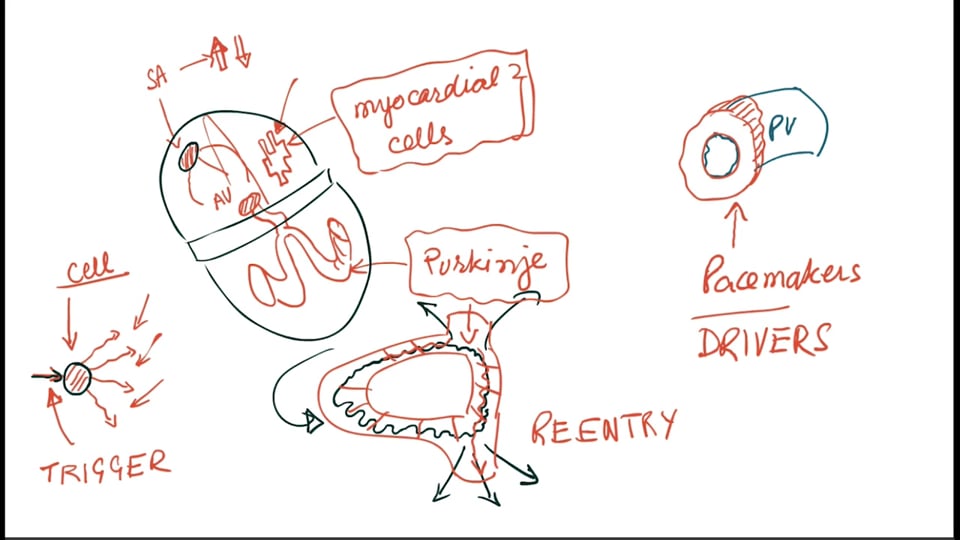 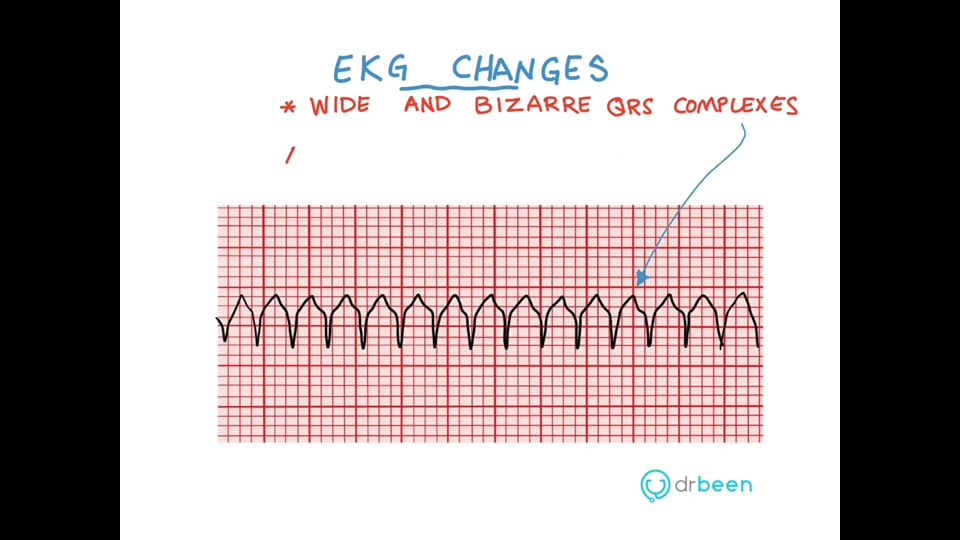 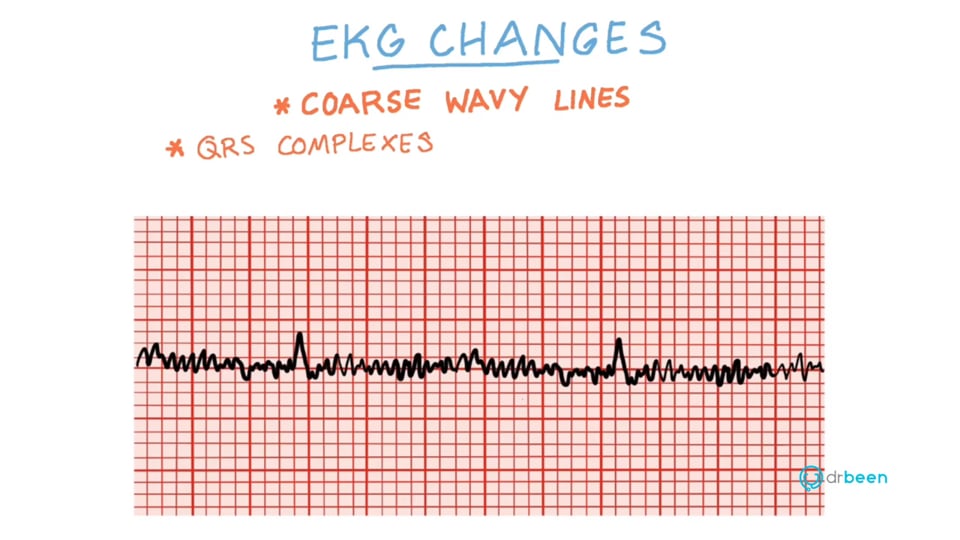 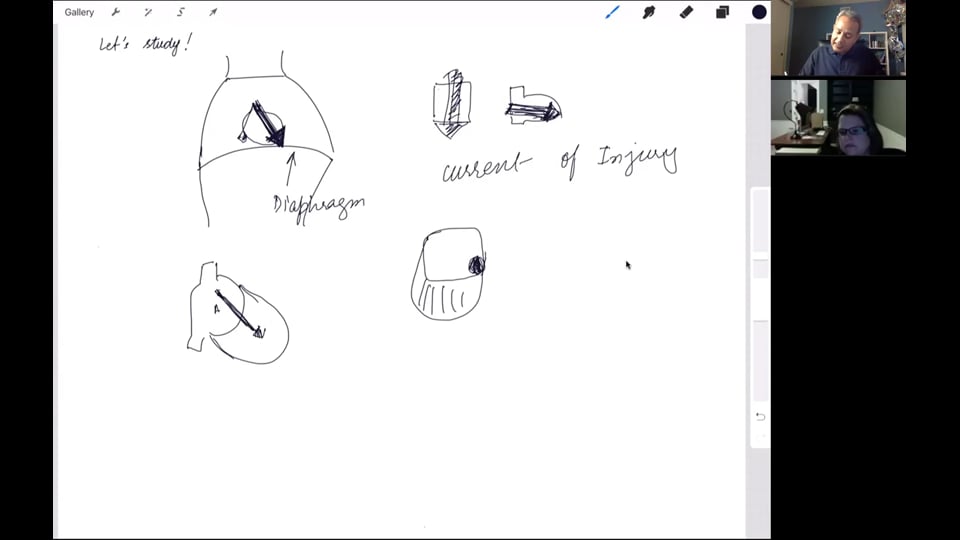 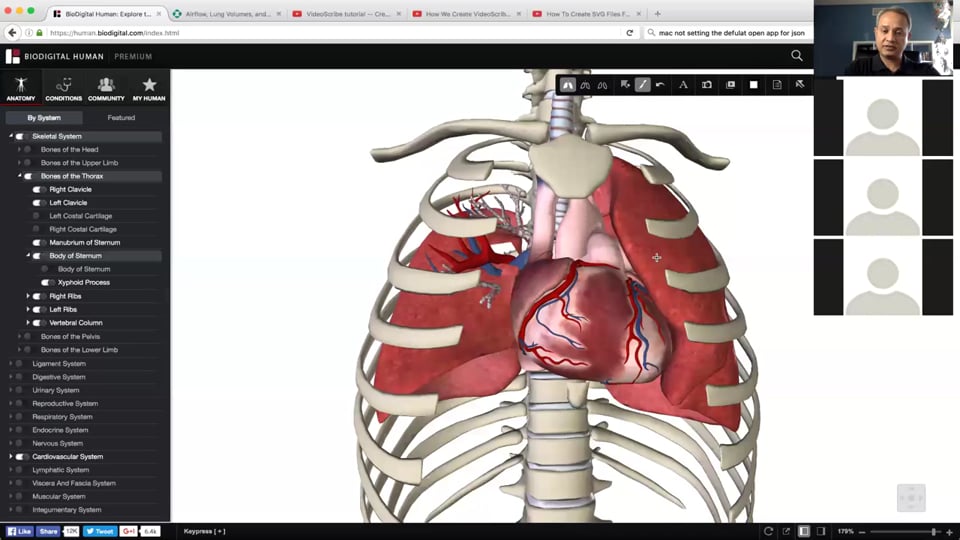 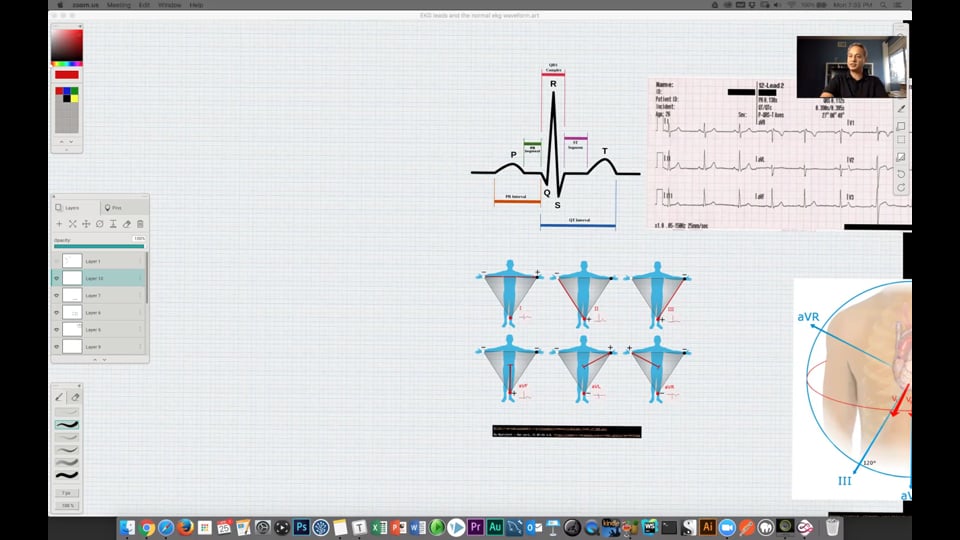 All information contained in and produced by DrBeen corp is provided for educational purposes only. This information should not be used for the diagnosis or treatment of any health problem or disease.
THIS INFORMATION IS NOT INTENDED TO REPLACE CLINICAL JUDGMENT OR GUIDE INDIVIDUAL PATIENT CARE IN ANY MANNER.
Click here for full notice and disclaimer.